The heart of the matter...The music of

with a special tribute to Don Henley

The heart of the matter is a brilliant show featuring five of Australia's most accomplished singers and musicians paying tribute to this classic band along with a special tribute to the "voice of Hotel California", Don Henley. 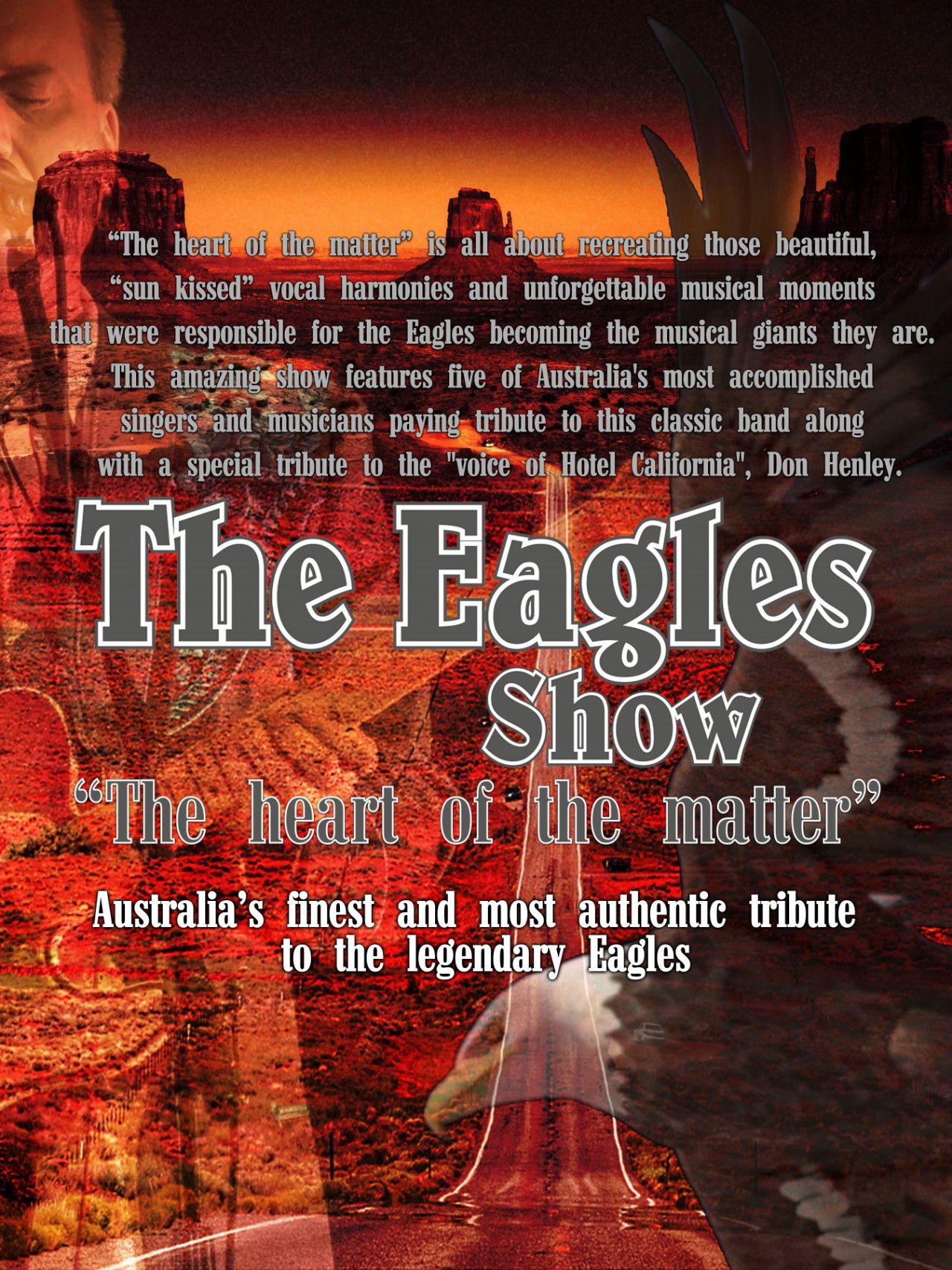 The Eagles are an American rock band formed in Los Angeles in 1971 by Glenn Frey, Don Henley, Bernie Leadon, and Randy Meisner. With five number-one singles, six Grammy Awards, five American Music Awards, and six number one albums, the Eagles were one of the most successful musical acts of the 1970s. At the end of the 20th century, two of their albums, Their Greatest Hits (1971–1975) and Hotel California, were ranked among the 20 best-selling albums in the United States according to the Recording Industry Association of America. Hotel California is ranked 37th in Rolling Stone‍ ’​s list of “The 500 Greatest Albums of All Time” and the band was ranked number 75 on the magazine’s 2004 list of the 100 Greatest Artists of All Time.

The Eagles are one of the world’s best-selling bands of all time, having sold more than 150 million records—100 million in the U.S. alone—including 42 million copies of Their Greatest Hits (1971–1975) and 32 million copies of Hotel California. “Their Greatest Hits (1971-1975)” was the best selling album of the 20th century in the U.S. They are the fifth-highest-selling music act and highest-selling American band in U.S. history. No American band sold more records than the Eagles during the 1970s.

The Eagles released their self-titled debut album in 1972, which spawned three top 40 singles: “Take It Easy”, “Witchy Woman”, and “Peaceful Easy Feeling”. Their next album, Desperado (1973), was less successful than the first, only reaching number 41 on the charts; neither of its singles reached the top 40. However, the album contained two of the band’s most popular tracks: “Desperado” and “Tequila Sunrise”. They released On the Border in 1974, adding guitarist Don Felder midway through the recording of the album. The album generated two top 40 singles: “Already Gone” and their first number one, “Best of My Love”.

It was not until 1975’s One of These Nights that the Eagles became arguably America’s biggest band. The album included three top 10 singles: “One of These Nights”, “Lyin’ Eyes”, and “Take It to the Limit”, the first hitting the top of the charts. They continued that success and hit their commercial peak in late 1976 with the release of Hotel California, which would go on to sell more than 16 million copies in the U.S. alone and more than 32 million copies worldwide. The album yielded two number-one singles, “New Kid in Town” and “Hotel California”. They released their last studio album for nearly 28 years in 1979 with The Long Run, which spawned three top 10 singles: “Heartache Tonight”, “The Long Run”, and “I Can’t Tell You Why”, the lead single being another chart-topping hit.

The Eagles disbanded in July 1980 but reunited in 1994 for the album Hell Freezes Over, a mix of live and new studio tracks. They have toured intermittently since then and were inducted into the Rock and Roll Hall of Fame in 1998. In 2007, the Eagles released Long Road Out of Eden, their first full studio album in 28 years and their sixth number one album. The next year they launched the Long Road Out of Eden Tour in support of the album. In 2013, they began the extended History of the Eagles Tour in conjunction with the band’s documentary release, History of the Eagles.

Listen to the Show Sounds

The Heart Of The Matter - The Eagles Show

Born in Gilmer, Texas in 1947…Donald Hugh “Don” Henley seemed destined to live out his life in a small town with a wife and family, without the outside world knowing he ever existed. He was born with one of the most expressive and soulful voices in popular music, with a distinctive rasp, giving it a world-weary depth that belied his young age. With a gift for writing intelligent, insightful and sometimes controversial lyrics, Don Henley has established himself as a master storyteller, and has never been afraid to tackle subject matter than many would not touch.

His career with legendary band The Eagles would be enough to give most artists a profound sense of accomplishment however, Don has always been one to continually move forward, and not rest on his laurels. Alongside Eagles classics such as “Life in the Fast Lane”, “Hotel California”, “One of these Nights”, “Witchy Woman”, there are the more recent works such as the multi-grammy award winning “End of the Innocence”, “Last Worthless Evening”, “Talking to the Moon” and the smash hit from 1984, “Boys of Summer”.

Paul McGovern developed a love for Don Henley’s music through his exposure to The Eagles, and having served as the principal vocalist in The Eagles tribute show “New Kids in Town” in the late 1980’s.

Paul was born to sing these songs possessing a voice with an identical range and a slight huskiness akin to Henley’s, lending a feel of authenticity to his delivery.

Follow Don’s journey from small town Texas, and his early exposure to country music and rock and roll, through the heady days of the 1970’s as a founding member of The Eagles, to the respected and mature artist that he is today.
It could be said that Don Henley’s songs always get to “The Heart of the Matter”. 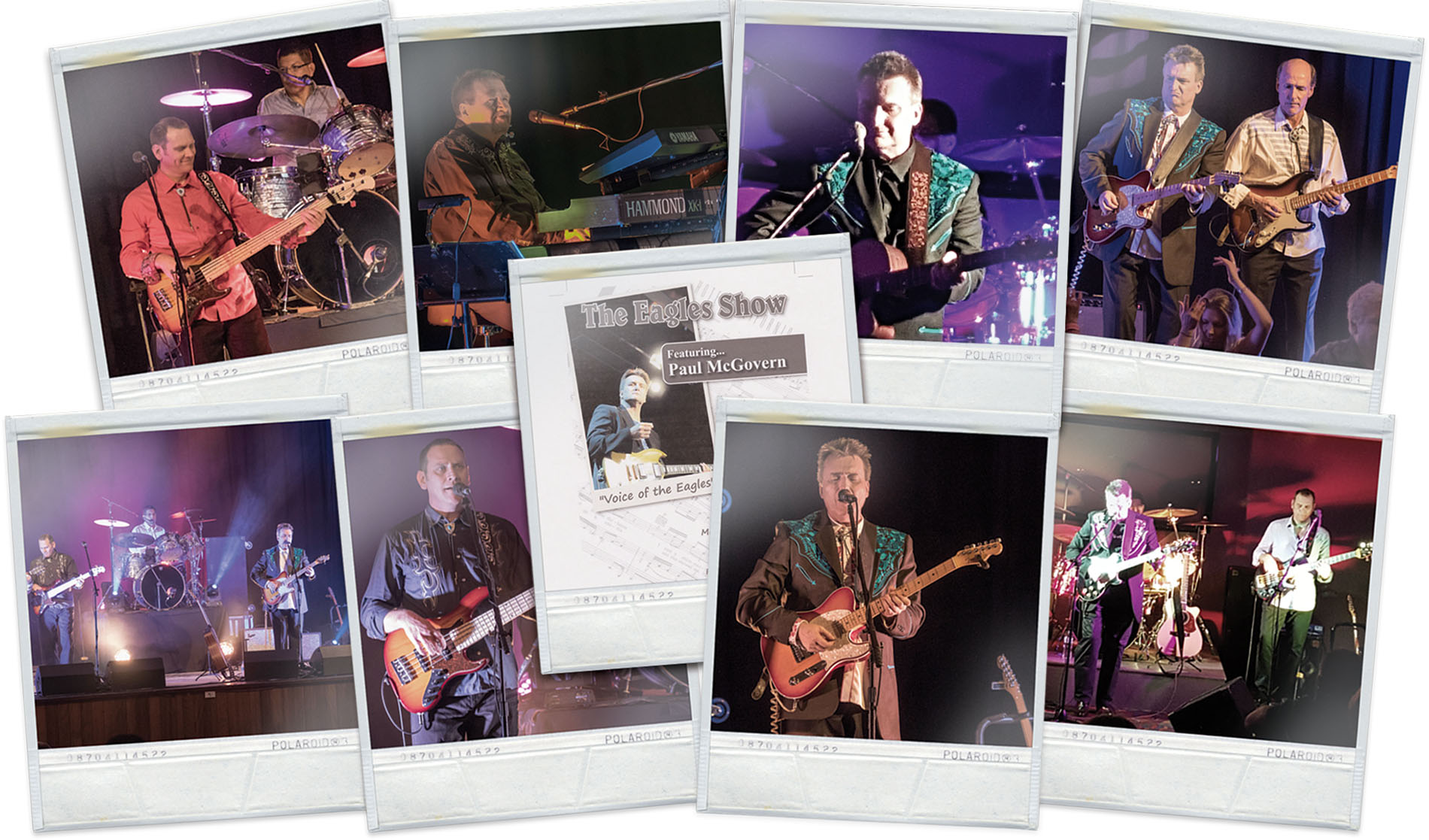 WE LOOK FORWARD TO TAKING YOU TO THE HOTEL CALIFORNIA…

“IT’S SUCH A LOVELY PLACE.”

“The heart of the matter” is all about recreating those beautiful, “sun kissed” vocal harmonies and unforgettable musical moments that were responsible for the Eagles becoming the musical giants they are.

To paraphrase the Eagles…this show will make you realise that “you can check out anytime you like…but you will never want to leave”.